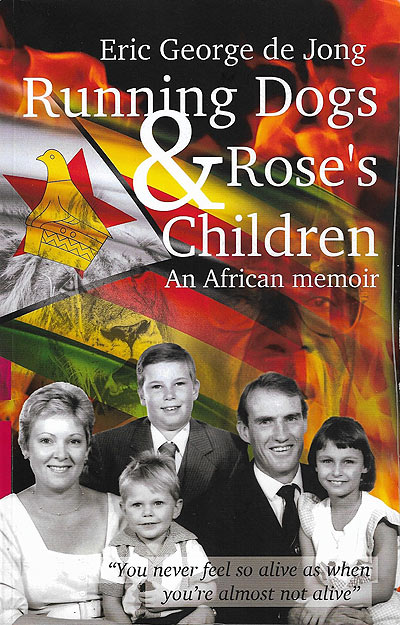 Eric de Jong’s book is not just an honest and personal account of his life from when he and his wife, Jenny, adopted three children whose mother was dying of cancer, it is also in many way an historical account of the times when Robert Mugabe unleashed a war on white farmers and his political opponents.

Eric’s love of Zimbabwe drove him to become involved in supporting the MDC, then under the helm of Morgan Tsvangirai.  He exposes and recounts the terrible and vicious indiscriminate beatings and murders.  He writes about the organised taking of farms by drug and liquor fuelled ‘war vets’ – most of whom were too young to have fought in the war – and how the press managed to arrive before the bedlam started.  He tells of the bravery of so many men and women looking for a better life, those that continued working and farming under terrible conditions and threat to lives.  He writes about the comradeship across the board of colour and wealth, and how so many people, himself included, put their own lives, and those of their families, at risk.

However, there is much more to this candid memoir.  Eric tells of how he and Jenny adopted, nurtured and loved Rose’s three children. With humour he tells of the trials of being an inexperienced father, and the tough road they travel with the youngest, Dan.  Underneath so much stress, including that of farming, he sees the funny side of so much, which is obviously what kept him and Jenny going in the darker times.

Escaping to South Africa in an attempt to make a better and more secure life for the family, from where Eric continues to be a political activist, he shares his attempts at creating a financial empire by growing and distributing flowers.  Luck was not always on his side!

The de Jong family returned to their beloved home and farm in Zimbabwe, from where Eric now puts his incredible energy and enthusiasm into raising money and awareness for the destitute Zimbabwe pensioners through his charity Old Legs Tour.

There is so much in this wonderful book –laugh aloud one minute, tearful the next, amazement, shock, joy and empathy – it is all there.