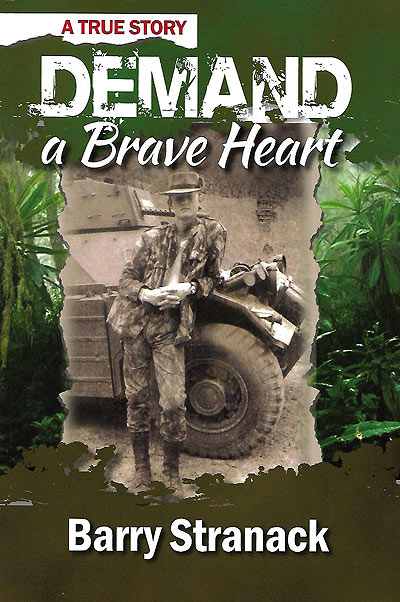 A turbulent childhood and having Attention Deficit Hyperactivity Disorder (ADHD) a condition almost unrecognised when Barry Stranack was a young boy, is no easy start to life.  When his parents divorced he and his brother were placed into a home until his father remarried.  Sadly Barry’s father drowned whilst fishing and not being able to cope, his young step-mother placed the brothers back in the home.  Barry’s mother then remarried and the family moved to Malawi, “I must admit that these were the happiest day of my youth”.

After a short time in Durban, jobless and poorly educated, Barry returned to Malawi.  It was here that his life changed forever due to an advertisement in the local newspaper for recruits to join the Rhodesian Army.  Thus a young 17 year old Barry joined the Rhodesian Light Infantry (RLI) and became a ‘real soldier’.  Training was hard and needed for the time of counter-insurgency warfare this highly respected regiment fought.  Leaving the RLI to join 5 Commando in the Congo, but turned down as he was too young, Barry found himself homeless and jobless, but not friendless.  In order to survive he became a fireman on the steam locomotives with the Rhodesian Railways.

Illegally crossing borders in the boot of a car, and after a very short spell in Zambia discovering he was innocently involved in an illicit operation, Barry swam the Zambezi back into Rhodesia and returned to South Africa. At the age of 19 going on 20, Barry finally managed to enlist with 5 Commando joining other new recruits in the Congo.  The next part of this book recounts his time as a mercenary in the Congo and the vicious war in which hundreds of thousands of people lost their lives.

As a result of time spent fighting in the Congo, Barry suffered from Post Traumatic Stress (PTS), but back in Salisbury (now Harare) he pursued his love of karate.  Preferring the discipline Shukokai he achieved his goal of becoming a black belt.  Being taught to develop a positive mental health, Barry learned to be more humble and gentle.

Karate became the major influence in Barry’s life.  Changing from Shukokai to Sankukai, which he introduced to Rhodesia then into South Africa, he opened a dojo (gym) in Durban.  However, with the war in Rhodesia escalating Barry managed to re-enlist back into the army and ultimately the elite Selous Scouts.

When the war ended in 1980 Barry, now married, returned to full-time karate instructing and graduated with a Doctor of Chiropractor degree and later a Master’s Degree in Physical Education.  He continues to coach karate and practices as a chiropractor in South Africa.

The intriguing title of the book DEMAND A BRAVE HEART is the family motto from Barry Stranack‘s Scottish father.  Throughout this book Barry has shown that despite many adversaries and challenges, being true to himself and never giving up, he does have a Brave Heart.  Honouring those Barry met during the course of his life’s journey, describing emotions of loosing much loved family and friends, and acknowledging his faith in God, Barry has written an inspiring and honest memoir.