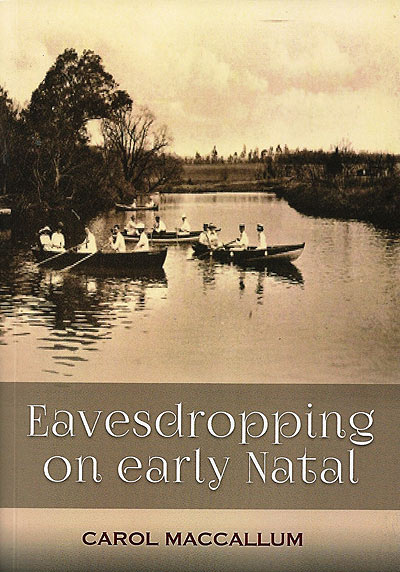 “Three hundred and forty one years after Vasco da Gama landed on the east coast of Africa in 1497 and named it Natal, the first white settlers arrived in 1838.”  So begins the fascinating history of Natal. The first white pioneers to Natal, Henry Fynn and three mechanics arrived at Port Natal on the 10th March, 1824 looking for King Shaka. Though they found no other inhabitants on arrival, Fynn did find, and befriended, Shaka.

Covering the Victorian era, 1837 – 1901, and meticulously researched, Carol Maccallum has written a captivating book with so much information of the whys and wherefores of the making of a now vibrant province of South Africa. The reader is transported to the days when society in Pietermaritzburg was beginning to develop, businesses were being set up, laws were made and broken and farms established to feed the growing population.

Do you know who hid Winston Churchill after he escaped from the Boers?  How and where did Michaelhouse School start? Why did the Headmaster of Hilton College buy thousands of tins of potted meat from the British after the Anglo-Zulu war of Isandhlwana?  When was Fort Nottingham Village built and why? When did Indians first come to Nottingham Road and where does the name Howick come from?

It takes many people of different backgrounds to build a nation, and Carol introduces us to well-known and lesser-known people, places and episodes of the history of Natal, the good and the bad.  The treatment of the Bushmen, the inhumanity of the Anglo-Boer War are recounted alongside gun-smuggling in the village of Richmond, the cost of the fare on a coach from Pietermaritzburg to Durban  – 11 hours one way! – the date the first rickshaws appeared in Pietermaritzburg, 1898, and why Curry’s Post Inn became so popular, all add to the colourful kaleidoscope of this intriguing book. Black and white photographs portray the scenes and buildings described by Carol with a glossy cover showing people boating on the Umzindusi River, Pietermaritzburg.

EMBERS OF A CAMPFIRE →