EMBERS OF A CAMPFIRE 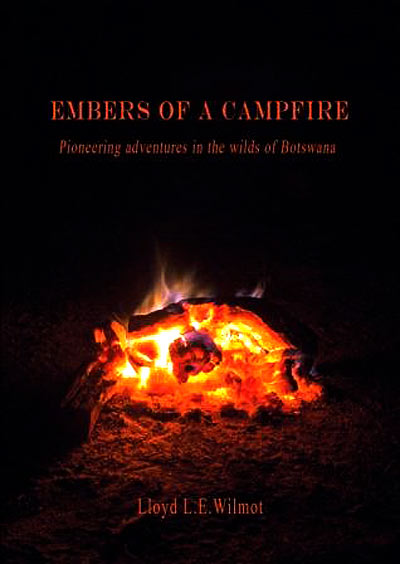 Embers Of A Campfire: Pioneering Adventures in the Wilds of Botswana

It is when sitting around a campfire after a day in the bush, with flickering flames casting shadows, the sound of the night-jar calling, the crackling of leaves underfoot a prowling cat, enjoying the comradeship of fellow travellers, that tales of adventure are told and shared.

Following in the footsteps of his grandfather Eric Cronje Wilmot and father, Bobby Wilmot, who took him as a child trekking for two years in an ox-wagon, Lloyd Wilmot was destined to be a man of the wilderness.  Embers of a Campfire tell of his many experiences whilst sharing his love and knowledge of his home country.

Encounters with lion, “there behind a thorn bush lay the big male. His menacing growls revealed his bad mood,”  pythons in vehicles, saving hyena pups and feeding them Doc Martin vitamins, calling leopards, the belligerent elephant Elroy, and much more, despite sometimes hard to believe, are all true. Lloyd also discusses campfires, tracking of spore, guides he has worked with, respect of the local cultures, conservation and wildlife management.

One doesn’t have to have been on safari in Africa to relate to the beauty and excitement of Botswana.  Enjoy Lloyd’s evocative descriptions of thisfascinating country, home of the Okavango Delta, the Kalahari Desert and the Chobe National Park. A small part of the allure of Africa.