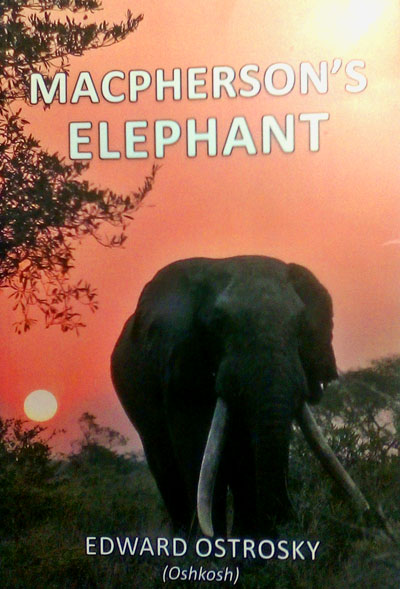 This is a work of ‘faction’, a novel, inspired by real events that took place in and around the Tembe Elephant Park in the late 1980’s and early ‘90s.  Ed

Tembe Elephant Park was established in 1983 to protect elephants which used to migrate between Maputaland and southern Mozambique. Ed Ostrosky founded and managed Tembe Elephant Park for 17 years, and it is his experiences working daily with elephants that had been traumatised by armed poaching during the civil war in Mozambique, that this exciting, real-to-life book portrays.

Macpherson must pursue a killer elephant christened ‘uSathane’ (Satan) by the Zulu game scouts. Tembe Elephant Park is known for the large number of ‘tuskers’ – elephants with enormous tusks. Describing ‘uSathane’, Ostrosky was influenced by the well-known Isilo, a bull elephant that lived in the Park with tusks estimated to be more than 3 metres (9 feet).  In this, though a novel, book Ostrosky relates the awe and privilege he experienced of being able to see and work up close with such magnificent animals such as Isilo.

Full of  intrigue, encounters with wild animals and poachers, knowledgeable bush lore and a deep understanding and passion for the wilderness Macpherson’s Elephant is gripping and authentic.  A page-turner!