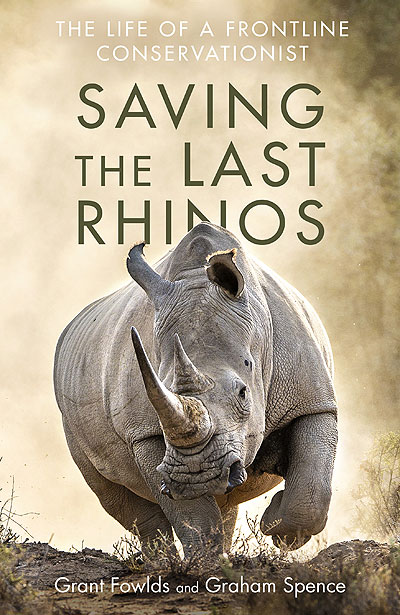 Saving the Last Rhinos: The Life of a Frontline Conservationist

Grant’s first and abiding love was for goats. Growing up on a farm in the Eastern Cape of South Africa he gained true understanding and admiration for the local people and the wilderness around him, becoming a passionate conservationist. As much of the Eastern Cape is not suitable for farming, and escalating theft, collapsing markets and higher costs were making it difficult to continue with the family enterprise, the Fowlds family, noting that the area once teamed with wild animals, decided to turn their property into a paying game reserve. Thus the internationally respected Amakala Game Reserve came into being – but also first-hand involvement with the shocking and gruesome results of rhino poaching.

Saving the Last Rhino is not just about rhino, it is the story of one man’s journey to commit to helping protect wildlife, with initially an emphasis on educating the young to help prevent the poaching of rhino. When after years of growing bananas his farm in Zululand was expropriated, Grant was invited by Kingsley Holgate to help develop the Rhino Art project. Together with Richard Mabanga they went to village schools to meet and discuss with the children the poaching crises. Their mission statement was ‘Let the children’s voices be heard’. This was done by giving the children crayons and paper to draw what they perceived the situation to be.

Alongside farming and Rhino Art, Grant was also involved in Amakala and it was whilst at the Travel Indaba he had a chance meeting that took him up to the Democratic Republic of Congo, (DRC) again to conserve wilderness areas and wildlife.  As often happens in Africa, politics prevented the completion of turning neglected reserves back to life-giving wildlife habitats.

It was in the DRC that Grant met people like John Kahekwa, an award winning conservationist who lives in poverty as every cent he earns goes back into his successful Pole Pole project that he started with a US$10 tip.  All through the book Grant pays homage to the many people who have dedicated their lives in some way to help conservation in Africa from the humble ranger, to policy makers and fund-raisers.  Without them nothing can be done to deliver Africa from the greed and corruption of people destroying the natural heritage.

← EMBERS OF A CAMPFIRE LIVING THE WILDLIFE →