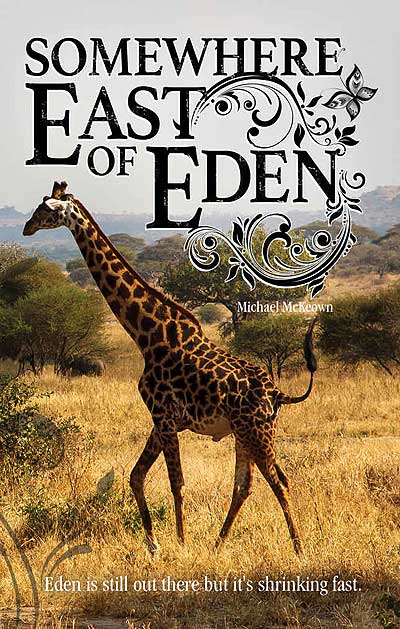 “Yes, I go savy him. Na, good man dis. But sometime his mind done humbug him and ‘e go walkabout.” Augustus shrugged fatalistically.  From his demeanour, it was clear that he had no idea when the driver would come, other than at some stage he would.

Another fascinating collection of unusual experiences in Africa, author of the previous best-seller Half Way Down an African Moon, Michael McKeown writes about not only the interesting wildlife he searches for, but the people who explored and developed Africa.  Gorillas and forest elephants,  hippos, the Mauritian Dodo, and people like  Mary Kingsley who in 1893 travelled by foot and canoe from Sierra Leone to Luanda in Angola dressed in flannel petticoats, long black skirts and carrying an umbrella; share the pages with Jane Goodall, and pangolin specialist  Lisa Hywood of the Tikki Hywood Trust in Zimbabwe.

Somewhere East of Eden is not just a travel book, with discussion on conservation of wildlife and the environment, the illegal rhino and elephant ivory trade, the curious people one meets along the way, this evocative memoir is a reminder of what Africa was – an Africa we are rapidly losing.

← HALFWAY DOWN AN AFRICAN MOON: TRAVELS IN SUB-SAHARAN AFRICA GOING TO GROUND →