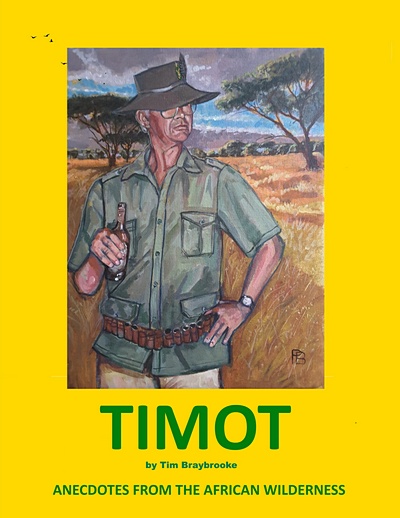 TIMOT – Anecdotes from the African Wilderness

1957.  A legend amongst his peers, on Tim’s first day at Wankie (now Hwange) National Park as a junior ranger he was issued with a horse called Turk, two pack-mules called Whiskey and Bob and six pack-donkeys. Thus began career that would involve working in the wilds of Rhodesia/Zimbabwe, learning as he went along the intricacy of wildlife management before the days of fancy 4 x 4 vehicles, internet and cell phones.

Having had a spell with his close friend, Storm Stenslunde, hunting crocodiles in the Okavango Delta, Botswana, then travelling from London to Rhodesia, most of the time  having to hitch-hike, Tim – or Timot as he was affectionately known by his many friends – knew working in the bush was his future.  After being with the Department of Wildlife for many years he opened a hunting outfit and then worked in the eco-tourism industry.

This unique collection of photographs and Tim’s anecdotes told to and compiled by friends, is a fascinating account of the hardships, bravery, and fun he and his colleagues experienced, at the same time as being a record of the early days of being a ‘game ranger’.

Proceeds of this book are for the Zimbabwe Pensioners’ Support Fund, which supports 1500 retired people in Zimbabwe who have very little. They are given food parcels, wheelchairs etc. by the ZPSF, based in South Africa

← Then a Wind Blew YOU NEVER REALLY KNOW →