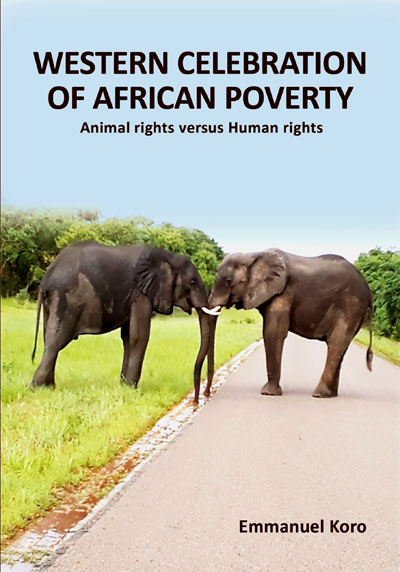 A powerful exposé of how western beliefs, many gained from misinformation and propaganda, influences the lives of millions of people in Africa by telling Africa what to do with their wildlife.

Emmanuel Koro is a highly respected and award-winning environmental journalist, who has travel to the remote areas of Botswana, Mozambique, Zimbabwe, Namibia and Zambia gaining first-hand knowledge of the conflicts and benefits of living with wildlife. He argues that the influence of emotional, as against scientific, activity does nothing to improve conservation.  Nor does it improve the livelihood of many thousands of poverty-stricken people.

Koro explains the workings of CITES (UN Convention on International Trade in Endangered Species of Wildlife and Flora), whilst at the same time quoting proof on vote-buying amongst non-African countries and well-funded donor organisations.  It is interesting to note that when interviewed Will Travers of the Born Free Foundation was unable to answer basic questions on conservation, and became confrontational to cover up his lack of knowledge.

Koro draws facts and information from his many interviews of people closely connected, and dedicated, to the conservation of wildlife and those looking for answers to the over population by humans, and  control of over population of wildlife, in restricted areas.  He discusses the influence the media has on people’s conceptions, and how often facts are distorted in favour of sensationalism with dramatic headlines and higher fees paid to journalists.

Western Celebration of Africa Poverty discusses the rights to trade in wildlife products saying that “the ban on international trade and rhino horn is bad for African people and wildlife.” Koro quotes monetary benefits from crocodile skins and the fact that after decades of banning legal trade, poaching and illegal trade is still taking place.

A very thought-provoking point is that with so much money going to the protection of wildlife, people who have to live with the consequences of unmanaged or badly managed environments, believe that the rights of animals supersede theirs.  This is, in their minds, a violation of their human rights.

Mr Biggie Shoko lives in a community neighbouring Hwange National Park in Zimbabwe. He recently survived a terrible elephant attack and his brother was killed by an elephant. Shoko is quoted saying “When we do not get benefits from our wildlife, including elephants that attack and kill us and our loved ones, destroy our crops and properties; there is no reason to look after them.”

Whichever side of the dispute of animal-welfare versus animal- rights you may be on, this book, with an authoritative Foreword by Eugene Lapointe, the Switzerland-based President of the IWMC-World Conservation Trust, is a necessary contribution to understanding the facts and reality of the current situation.