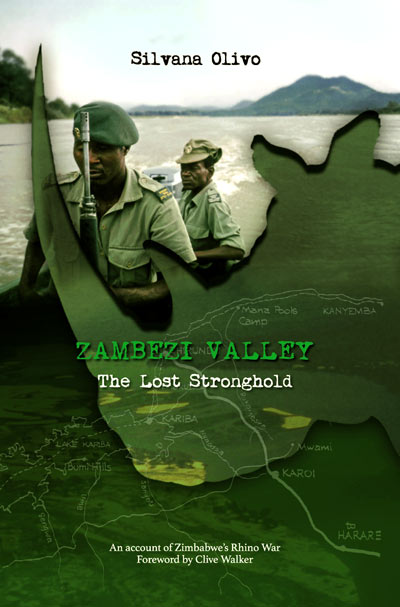 “Let us not look back in anger, but forward in fury”

This is a quote by the late Dr Ian Player, internationally acclaimed for his dedication to saving the rhino and his conservation work, which Silvana Olivo has included in this personal account, extremely well documented and written book.

Though this quote was probably not intended to emphasise the struggle that had taken place in Zimbabwe, and indeed in Africa, to conserve the black rhino, it does strike a chord in that despite the dedication, hardships and continued struggle taking place since the late 1980’s,  the ‘war’ to preserve wildlife and fight organised crime still goes on.

Initiated in 1984 by the late Glen Tatham, then National Parks Chief Warden, Operations; in an attempt to protect the endangered black rhino of the Zambezi Valley, Operation Stronghold was at the fore-front, tracking poachers, going undercover to gain information on traffickers, translocating and de-horning rhino, and living rough whilst surviving in critical economic times.

It was as a young veterinary student living in Italy, once again visiting family in what had become her beloved Zimbabwe, that Silvana became involved with Operation Stronghold. As a passionate supporter she diarised and reported on her experiences, whilst working alongside National Parks officers and rangers, liaising with media and raising funds for badly needed equipment.  International opinions, organisations and associations, often miss-informed also played a part in the work undertaken by African countries protecting, in particular, their rhino and elephant.  This often hard-hitting book tells how it really was.

It was a small war, by global standards, but just as vicious and dangerous.  Under the leadership of Glen Tatham, with a committed team of wardens, rangers, pilots and researchers all risking their lives, desperately lacking funding and man-power and often with political interference and the constant undercurrent of corruption, Silvana acknowledges with respect the part these dedicated men and women played.

Not only is this book a much needed history of the efforts to protect the black rhino, but is also in part a memoir of a young girl who had the courage to become involved, almost thirty years ago, to live a dream and dedicate herself to supporting this conservation initiative,   At 21 she was the official Italian representative for Operation Stronghold, helping to create awareness of the dire need to save what few black rhino, were still living in the wild. Despite being overly poignant at times, her love of the country is expressed through her evocative descriptions.

With a forward by renown conservationist and author, Clive Walker of Lapalala Wilderness Rhino Sanctuary, the Endangered Wildlife Trust and the Elephant and Rhino Foundation, Zambezi Valley – The Lost Stronghold is a fine piece of investigative journalism which will appeal to anyone interested in conservation, understanding the work and decisions behind today’s continued struggle to protect fast diminishing free-roaming wildlife – both professional and layman – and an important addition to any Africana collection of books.